Now, I don't want to brag or anything but... Okay, maybe I do. "Scary or Die" is on Big Daddy Horror Film Review's Top-10-Must-See-Upcoming-Horror-Films! Pretty cool eh? Our trailer blew him away and it was only the teaser! I bet you all can't wait to see what else we have in store. Too bad you have just a few more sleeps to wait...
Posted by Scary Kayla at 1:33 PM 1 comment:

How often after watching a scary movie, or perhaps even a scary movie's trailer did you end up having nightmares that gave you cold sweats and kept you from being able to completely sleep?

This is me by definition. Name the movie, I've had a nightmare about it. Most recently, I've been having dreams that have had a lovely guest appearance by non-other-than Chucky, the Child's Play doll himself! Have you seen those movies? A serial killer used magic to put himself into a doll to escape capture and is now trying to find a child to transfer his soul to.The doll is agile, sneaky and smart. Everytime I think about opening a door into a dark room, the possibility of him standing there with a huge knife gives me the heeby geebies! 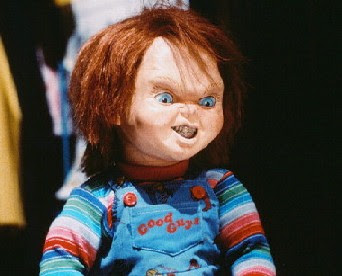 We also have Jurassic Park. Those velociraptors, even from the first Jurassic which was created in ancient movie times (for those 90s babies that is) 1993 are still scary as all heck! I remember countless nightmares where I am fleeing from these intelligent group hunters only to wake up more tired than I was when I first fell asleep!

Scary or what?!?!?!? credit: googleimages.com
Now, imagine me after seeing the trailer for "Scary or Die". I must admit, it takes a lot to scare me during a movie or even a particular scene in a movie but my mind must save it all for my dreams because I feel like the entire night after I saw the trailer was occupied with me again, running away from something. Want to know what it was? Those scary clowns!! Did you see the teeth? I don't want them piercing my arm! ouch! So dream me is running, running running and thankfully, I was saved by my 4:55 alarm.

Did the Scary or Die trailer invade your dreams recently? If so, tell me about it! Also, tell me what creepy movie characters make appearances in your nightmares.
Posted by Scary Kayla at 10:46 AM 3 comments:

Scary or Die Has Arrived

Zombie girl is walking around looking for her lost love and these story lines are inter-woven. So no, this isn't True Blood and no, there isn't a sparkly Edward Cullen giving you googly eyes through the screen. Yes, you don't even have to ask, the clowns are scarier than "It" and Pennywise the Clown from "It" was scary as f%^&k. You know it, don't even lie. After watching that movie you didn't want to look down a storm drain ever again!

If you haven't seen the trailer yet I recommend watching it alone, full screen, lights out. Perferably right before bed for the best results. Click Here to Watch if You Dare

Now, please do me the honor of telling me what your favorite part of the trailer was. This is only a teaser so you're going to have to wait for more. Trust me, it only gets scarier from here. Can you handle it?

Sleep with the lights on.
Posted by Scary Kayla at 8:24 AM No comments: